Before jumping head first into some of the many aspects that could come under the banner ‘Sport Psychology for Soccer‘ let’s first establish some facts. First of all soccer is also known as football, the preferred term outside of the USA. This paragraph from Quora explains it best:

The correct full name of the sport still is Association Football. Soccer is a nickname and is seldom used outside of the US. Neither is wrong, but Football (or Fútbol, or Futebol, or all the other forms of the word) is the world-wide popular name of the sport.

Actually, as a former goalkeeper, I prefer the term Soccer. In my playing days, the “ball” rarely came into contact with my “foot”. To pass the ball to my teammates I would almost always throw the ball out.

The term soccer, therefore, doesn’t discriminate against goalies in the same way that the name football does. It also makes a lot of sense to have a label that can’t be confused with other sports. Here in Australia, for example, the term football can refer to one of four totally different team sports. But if you tell someone you’re a, say, soccer referee, there is no chance they’ll think you officiate rugby league games.

The second fact is how dominate soccer is as the world’s most popular sport. At last count, there were 265 million registered players worldwide. No other sport comes close to this, see PDF below by Fifa.

Sport Psychology is Not Mental Health For Sport

This is not to imply that mental health is not linked with optimal performance in soccer or any other sport for that matter. Quite the opposite in fact. As sport psychologists and performance psychologists we do a lot of work assisting our sporting clients with their mental health. We do this because a) we can as registered psychologists and b) we know that it assists with both off-field and field areas. But when we’re assisting a soccer player with clinical depression (for example) this is more counseling that pure sport psychology.

As is very clearly explained in our online, self guided Mental Toughness Training course (Metuf) we want to have contrasting mindset for soccer practice versus actual matches. For training, we want our minds to be on the concept of constant improvement through high-quality effort. Actually, through the right amount of high-quality effort to be more precise. Furthermore, we want our training to be spread across four different areas – two below the neck and two above the neck.

Unlike in training when it’s normal to be trying our hardest, for matches we are better off just being as relaxed as possible. Having a Relaxed Competition Mindset is one of the key aspects of match day mental toughness. One of the best ways to actually develop a Relaxed Competition Mindset is by targeting the hour or three before you start the whistle. This blog post from 2019 goes into a lot more detail about how you can develop a Pre Game Routine.

If you’d like our help with any mental aspects of what you do then below are few ways to contact us:

Condor Performance currently has two fantastic performance psychologists based in Brisbane but there is always room for one more good one.

Are you are a Brisbane sport psychologist who loves sport? Do you want to decide when you work and how much? Are you a modern sport psychologist who is skilled at using webcam platforms such as Zoom, Skype and FaceTime video? If so then consider applying to become the next member of the Condor Performance team and our first Brisbane Sport Psychologist (with the endorsement).

Despite the fact that more than 90% of our sporting clients now choose to have their mental coaching sessions via webcam we have always sought to have psychologists well located in the most populated places across Australia. Brisbane is the third-largest city in Australia and the capital city of Queensland with a population of just under 2.3 millions people.

No Psychologists In Brisbane At One Time

For many years we had no psychologists based in Brisbane. Before 2017 the closest we got we one former psychologist who was physically located on the Gold Coast (about an hour south Brisbane) who would travel up to see our clients in Brisbane as required.

So what did we do before 2017 when someones googled “Brisbane Sport Psychologist” and contacted us a result? Simple, we offered to work with them via the wonders of modern technology. In fact, it was really enquiries from Brisbane and South East Queensland between 2010 and 2015 that motivated us to become much more invested in the whole concept of videoconferencing.

I am a great believer in Luck. The harder I work, the more of it I seem to have.

If you like this quote, as we do, then in 2017 we must have been working very hard because we got very lucky. Or maybe I should say the athletes, coaches, sporting officials and performers based in/near Brisbane got lucky.

Long-serving performance psychologist and all-round great guy Chris Pomfret and his lovely wife Belinda decided to relocate Brisbane. Chris had been living in Sydney until that point; ever since joining our team of sport and performance psychologists in 2012. During these years we had a bit of geographical one-sidedness. Brian, Chris, Gareth and Dave all lived in Sydney. The first of these three psychologists all lived within a 3-iron of one another in the Inner West.

And yet we had no psychologists (sport psychologists and/or performance psychologists) at all in either Brisbane or Melbourne. Chris’ move north up to Queensland fixed that without us having to find and upskill a local Brisbane based psychologist.

And Then Came, Luke

Then in 2019, we got lucky again. Luke Pryor, an endorsed clinical psychologist with a massive passion for sport, sport psychology and performance psychology got in touch. And you guessed it, Luke is based in Brisbane*. It was immediately obvious that Luke would fit in with the values and the culture we have at Condor Performance.

Not only did this mean we would now two Brisbane based psychologists working with and for us but Luke’s clinical psychology background added great diversity to our team. Even cooler, Luke is himself an endurance athlete so was/is ideally placed to work with triathletes, marathon runners, ultramarathon runners, ironmen and ironwomen.

*Luke might be moving slightly north from his home in Brisbane to The Sunshine Coast in 2020.

If you’d like more information about how to start working one on one with either Luke or Chris on your mental game then get in touch by completing the Contact Form via this link. 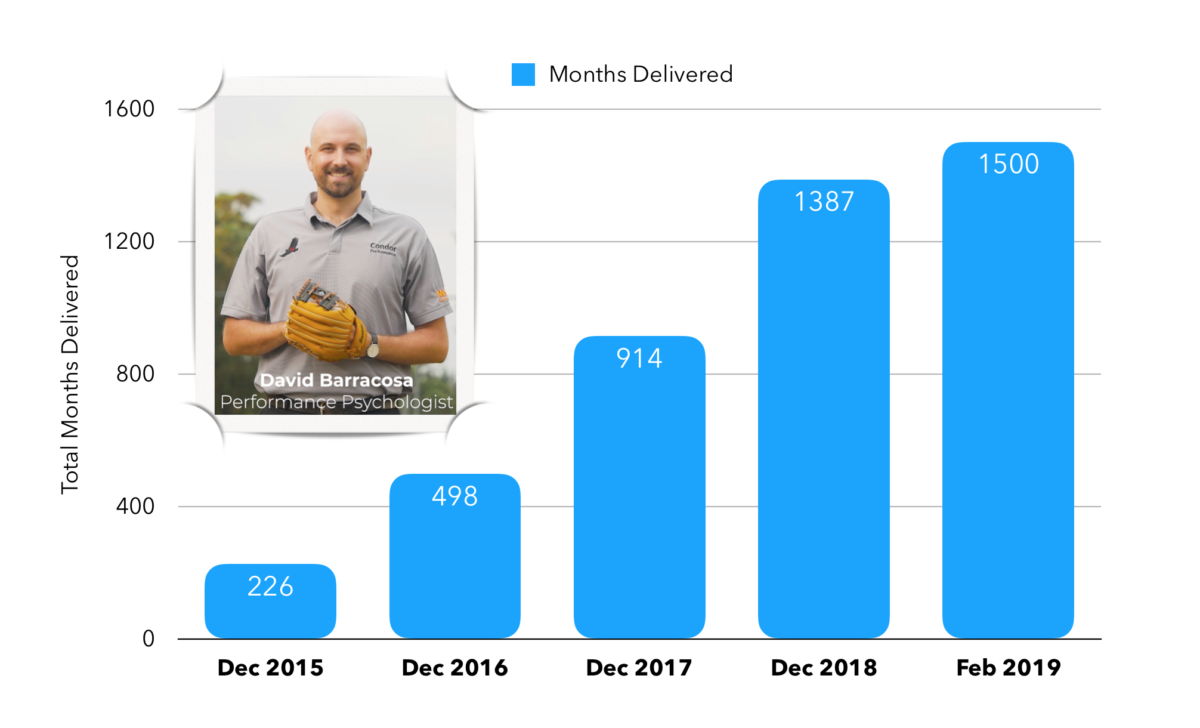 At Condor Performance we love a good milestone. In fact we even love the word ‘milestone’. Without any need to look it up on Wikipedia I assume the word originates from the old stone distance indictors that can still be found to this day in parts of Great Britain showing both the distance to and distance from various important towns and cities.

Well I don’t know where our final destination will be but due to being a company of meticulous collectors of statistics I can tell you exactly where we have come from.

Although I started Condor Performance in 2005 for most of the first eight or nine years the 1-on-1 work we did with athletes was pretty orthodox. Our clients basically paid for one hour session at a time with no contact in between. I can’t recall exactly what triggered it but around 2013 / 2014 we decided that there must be a better, more flexible way for us to assist both our sporting and non sporting clients.

With that our Monthly Options were born whereby the session-by-session approach was replaced by a month-by-month system. One of huge advantages of this change from the clients point of view was being able to have sessions are varying lengths as long as the total session time during the month was about what they’d paid for. Another benefit was the ability for the sports psychologist and client to interact between sessions via email and SMS to ensure the mental momentum made during session time was not lost.

As David Barracosa joined us in 2012 he was one of the original performance psychologists asked to deliver the monthly system from the very start (the other two psychologists still working for us who were around at that time were Chris Pomfret and myself). In other words apart from his first two years – when he was still training – David has only really known the month-by-month approach to mental coaching and very recently (February 2019) he reached yet another ‘milestone moment’.

The milestone being that Dave recently begun delivering this 1500th month of 1-on-1 mental toughness training as a Condor Performance employee. As impressive as this is maybe what’s even more noteworthy is the consistency he’s shown over the last 5 years. As can be seen via the bar chart above Dave’s experience has steadily increased year by year since we switched to this more flexible form of consulting.

Congratulations Dave from all of your teammates here at Condor Performance.

Performance Consistency, of course, is one of the many areas that we help our clients with so it’s particularly satisfying when it’s something we manage in our own performance as sport and performance psychologists.

For more details about the month by month approach to mental conditioning have a listen to the answers to our 12 most Frequently Asked Questions.

This very short YouTube video sums up what the sports psychologists from Condor Performance do and how they could help you with your sporting goals.

But of course, you already know that.

You’re just looking for the right way to go about it.

We work with a wide range of people from sporting to non-sporting performance, from amateurs to high performers, and professionals.

And our fastest growing group of clients; coaches themselves looking to improve the way they coach the mental side of their particular sport.

We use Skype and FaceTime for most consultations which enables us to have sessions at much more meaningful times such as before or after training, or in the moments prior to a crucial competition or performance.

Get in touch by completing one of the Mental Toughness Questionnaires on the MTQ page of our website, and we’ll try to get back to you within 24 hours.

The correct spelling is with the ‘s’ using the plural of the word sport – sports. This is due to the fact that sports psychologists work across many sports. 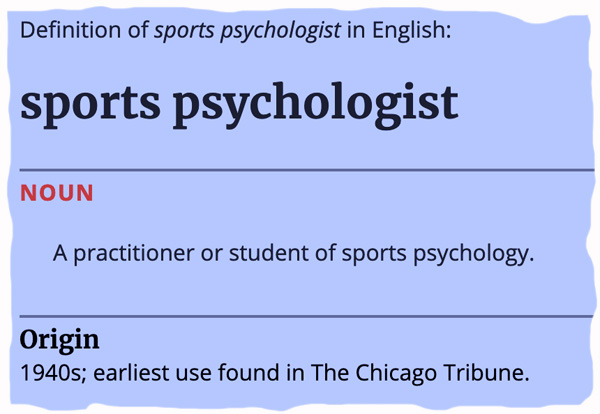 The correct term is ‘sport psychologist’ using the non-plural version of the word ‘sport’.

One of the reasons why the term ‘sports psychologist’ (technically incorrect) gets used almost as much as the correct term ‘sport psychologist’ is due to two reasons. First, they sound exactly the same when you say them (try it). Secondly, from a logical point of view if the psychologist works across many sports (as opposed to just one – which most of us do) then it might make more sense to use the plural version of the word sport.

For more on this subject read this very informative blog post by Canadian sports psychologist Kate F. Hays where she correctly points out that the original correct spelling was actually without the s – so sport psychology and a psychologist.

Request A Call Back: